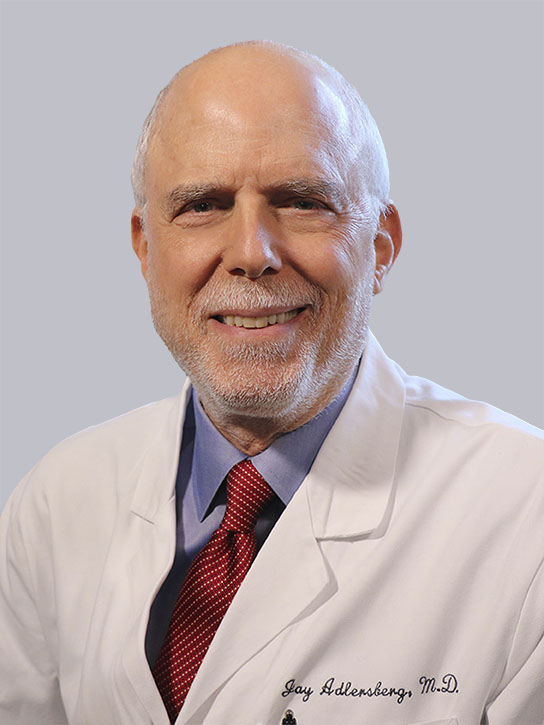 Jay B. Adlersberg M.D. is an award-winning doctor and journalist, who practices at 12 East 86th Street, Suite 7, New York, NY, 10028. As an internist and rheumatologist, he has forty-five years of experience treating the most severe forms of arthritis and joint disease. He served as the Director of Infusion Services and Strategic Rheumatology for six years and remains an attending physician at Lenox Hill Hospital. He is an attending physician and an Assistant Professor of Clinical Medicine at the Hospital for Joint Diseases and NYU Langone Medical Center. He has served for 15 years as an elected member of the Board of Directors, New York Chapter of the Arthritis Foundation.

Dr. Adlerberg’s main interests are rheumatoid arthritis, psoriatic arthritis, back pain, and autoimmune disorders. He is one of the most experienced doctors in the Tri-State area on the use of biologic drugs in the treatment of severe arthritis.

Dr. Adlersberg did his fellowship in Rheumatology and Immunology as an NIH-Postdoctoral Fellow at the Irvington House Institute of NYU Medical Center, under the guidance of the late Edward C. Franklin, M.D., a world-renowned immunologist and member of the National Academy of Sciences.

Dr. Adlersberg was recruited by Albert Einstein College of Medicine in 1974 and spent the next six years teaching and doing biochemical research on inheritance factors in cancer and arthritis. He is the author of a host of peer-reviewed scientific papers, including several publications that led to groundbreaking discoveries on how human cells make disease-fighting antibodies. He is the recipient of research grants from the National Institutes of Health and the American Cancer Society.

In 1980, Dr. Adlersberg left the world of laboratory and basic science research to practice medicine in Manhattan. Dr. Adlersberg has been voted one of the best doctors in New York repeatedly by New York Magazine and the Castle Connelly Guide.

For 30 years, Dr. Adlersberg was the nightly medical reporter at New York City’s Eyewitness News on WABC-TV. Along with others at Channel 7, he was awarded the Peabody Award for Excellence in Journalism for coverage of the Twin Tower attacks on September 11, 2001.